The precious and unsurpassable teachings taught by the Buddha of our times, Buddha Shakyamuni, have continued from the moment the Buddha first turned the wheel of dharma until today through the very vital and important tradition of transmissions.

Following the command of Kyabje Mindrolling Trichen Rinpoche, Mindrolling Jetsün Khandro Rinpoche established and guides the Vajra Vidyadhara Project, which is tasked with ensuring that the important tradition of transmissions continues. 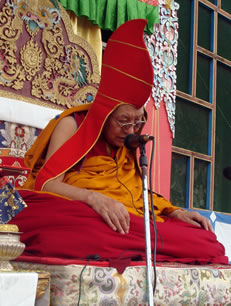 In receiving the blessings of the empowerment, practitioners gain the opportunity to practice the teachings and also to earn merit for themselves for the benefit of all sentient beings. 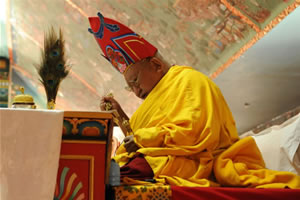 The Rinchen Terdzöd (the Precious Treasury of Terma) is one of the most treasured and important set of transmissions of the Nyingma School of Tibetan Buddhism. The Rinchen Terdzöd is a compilation of the treasure teachings of Guru Rinpoche, Vimalamitra, Vairotsana, and other great masters, which were concealed during their own time and later discovered by eminent tertöns, or treasure-revealers, between the 11th and 19th centuries.

In an effort to preserve these precious terma treasures, the great masters Jamgön Kongtrul Lodrö Thaye, Jamyang Khyentse Wangpo and Chokgyur Lingpa collected them into 64 volumes called Rinchen Terdzöd, or the Precious Treasury of Terma. This collection was described by the 15th Gyalwang Karmapa as “the quintessence of the ocean-like teachings of the sugatas, the profound Vidyadhara Pitaka of the Early Translation School.”

The Rinchen Terdzöd empowerments were bestowed at the Mindrolling Monastery in 1978-1979 by His Holiness Dilgo Khyentse and the lung (oral reading transmissions) was bestowed by His Holiness Dodrubchen Rinpoche at the time. Many teachers and students practicing and teaching the dharma today received the empowerments during this bestowal of these precious transmissions.

The empowerments were again bestowed by Kyabje Tsetrul Rinpoche in 2008. Namkhai Nyingpo Rinpoche bestowed the lung.