There has been another significant line within the Mindrolling tradition apart from the Trichen line of throne holders and the Khenchen line of vinaya holders. This is the Jetsünma line, one of the most remarkable features of Mindrolling. It is a line of many great female masters known as the Jetsünmas, daughters of various Mindrolling Trichens over the years. Beginning with Jetsün Mingyur Paldron (1699-1769), the daughter of Chögyal Terdag Lingpa, up to Jetsün Tsering Paldron (1969 – ), the daughterof Mindrolling Trichen, Mindrolling has maintained a tradition of female teachers.

The activities of the Jetsünmas continue a tradition that can be traced back to such remarkable women as Yeshe Tsogyal, disciple of Padmasambhava, Machik Labdron, the great Chöd master, and the great dakini Khandro Urgyen Tsomo.

Terdag Lingpa stressed the need for women to be educated as practitioners and teachers. He directed his descendants to maintain the precious tradition that he himself exemplified by empowering and teaching his own daughter, Jetsün Mingyur Paldron, along with his two sons. His inspiration has continued and many women have been inspired to practice and teach within this lineage.

Many great female masters have lived, practiced and taught within the Mindrolling lineage. In Tibet their activities took place in Samten Tse, which was the name of Mindrolling’s nunnery. In 1993, Jetsün Khandro Rinpoche established SamtenTse in Musoorie, India to provide a new centre where the long tradition of activities could continue and expand.

Unfortunately, due to the lack of written records, many dates and important pieces of information are missing. Yet, we hope that through sharing this partial history, it continues to inspire and encourage all practitioners. We invite you to read the biographies of a few of the particularly luminous female teachers. 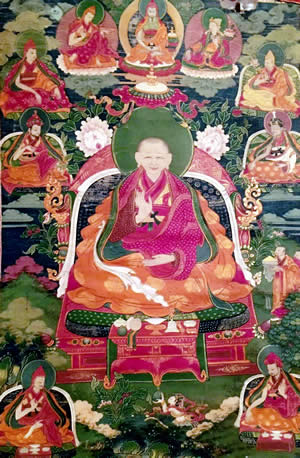 Jetsün Mingyur Paldron was born in 1699 in the Earth Rabbit year as the daughter of Chögyal Terdag Lingpa and his consort, Phuntsok Paldron. By 13 years of age, she had received extensive instructions and teachings from her father and had accomplished many practices.

Chögyal Terdag Lingpa passed into Parinirvana in 1714. In 1717, the Dzingar Mongols invaded Tibet and began destroying monasteries. Being in Central Tibet, Mindrolling was an easy target of this as well as other invasions. The Mongols razed the monastery and killed Lochen Dharmashri, brother of Terdag Lingpa, and Pema Jurme Gyatso, his eldest son. The younger son, Gyalsay Drinchen Rinchen Namgyal, managed to escape into Kham through the help of the family of the Khochhen Rinpoche. Jetsün Mingyur Paldron also escaped to Sikkim where she lived and taught for two years, turning the wheel of Dharma for many fortunate beings, firmly establishing the Dharma in Sikkim. Mingyur Paldron also founded the Pema Yangtse monastery there.

After the Mongols left Tibet, Jetsün Mingyur Paldron, who was then twenty years of age, and her younger brother Drinchen Rinchen Namgyal, returned to Mindrolling. They found it in ruins. Together, with their courageous and tireless efforts, they re-built the monastery and re-established the sangha, making Mindrolling once more the center of learning and transmission of the Dharma.

At the age of thirty-three, Jetsün Mingyur Paldron gave the empowerments, oral transmissions and explanations of the collected works of Chögyal Terdag Lingpa and the Nyingthig Yabzhi to over 270 disciples and thus insured the continuance of these precious transmissions.

Jetsün Mingyur Paldron also established the Samten Tse nunnery a short distance from the Mindrolling monastery. It was there that she spent most of the remainder of her life, practicing, teaching and composing many precious texts and inspiring many to follow the path she embodied.

Jetsün Mingyur Paldron passed into Parinirvana at the age of 70 in 1769. The life of this great female master is an inspiration to all practitioners, especially women, to practice and realize the pure Dharma for the sake of all sentient beings. 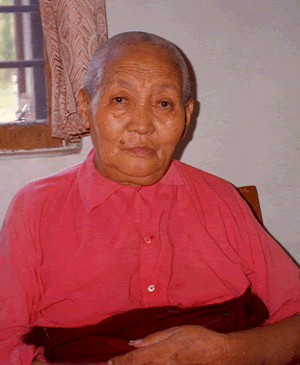 Jetsün Thrinley Chödron was born as the daughter of Tri Thrinley Namgyal. As an ordained nun, she received all the profound instructions from the lineage holders of Mindrolling and many great masters of the period. She taught widely, contributing greatly to the preservation of the Dzogchen lineage, particularly the Semde and Longde transmissions. Jetsün Thrinley Chödron was one of the main teachers of the great Jamyang Khyentse Wangpo.

Tsewang Lhamo was born as the daughter of Tritsab Pema Wangchen and was the grand-aunt to Mindrolling Trichen Rinpoche. Jetsün Tsewang Lhamo’s root guru was Jampal Dewei Nyima from whom she took her ordination vows and received the highest mind instructions. Jetsünma also received profound instructions and teachings from Khenchen Khyentse Norbu and Chung Rinpoche.

After the Cultural Revolution, Jetsünma lived with Chung Rinpoche until he passed away in 1979. In 1982, Jetsünma left Tibet for Mindrolling, India, with her younger sister Jetsün Dechen Wangmo and her grand-nephew, Khenchen Khenrab Gyatso, the present Minling Khenchen.

In Mindrolling, India, Jetsünma lived and practiced, inspiring many to follow the true path of practice. She exemplified the life of an ideal practitioner with her simple lifestyle and dedication to practicing the Dharma.

Jetsün Tsewang Lhamo passed away on June 16, 1995 and remained in samadhi for three days. During these three days, many people from throughout the world came to pay their last respects to this great master and to receive her blessings. Thus, even Jetsünma’s parinirvana became an example and inspiration for all practitioners, particularly to the monks, nuns, and lay-community of Mindrolling to practice the true Dharma and live a simple life. 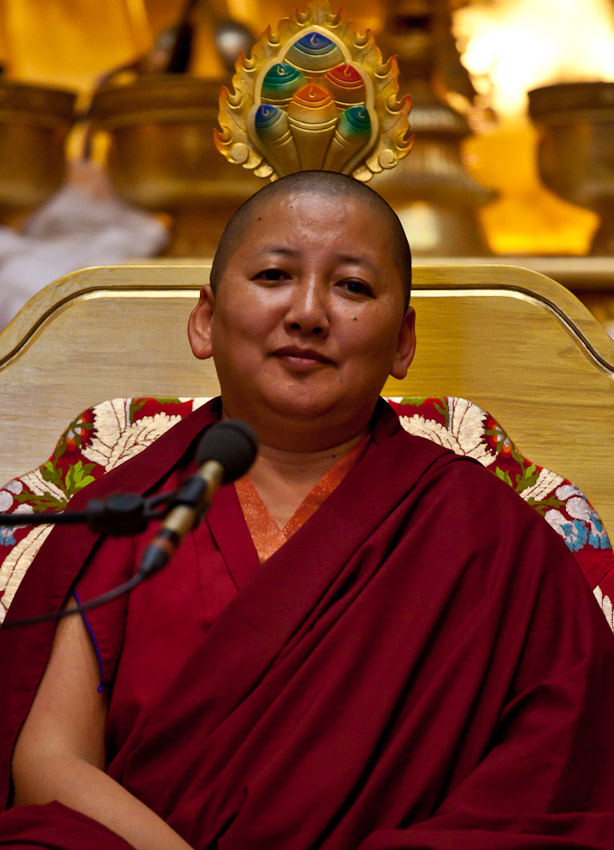 As the daughter of His Holiness Mindrolling Trichen, once the revered head of the Nyingma School, Mindrolling Jetsün Khandro Rinpoche, as she is widely known, was born in the lineage of Mindrolling, which throughout its history has had many accomplished and renowned female masters. At the age of two, Rinpoche was recognized by His Holiness the 16th Karmapa as the re-incarnation of the Great Dakini of Tsurphu, Khandro Ugyen Tsomo who was a one of the most well known female masters of her time. Thus, the present Khandro Rinpoche came to hold the lineages of both the Nyingma and Kagyu schools.