His Eminence Patrul Jampal Lodroe Rinpoche (1931-1987) was born in the year of the Iron Sheep and recognized as the incarnation of the great Dzongnang Jewon Kunzang Gyurme and enthroned at the Palyul Namgyal Jangchub Choling Monastery. 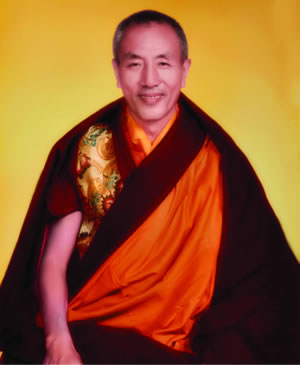 From a very young age, he received numerous profound teachings, transmissions and empowerments of the Kater lineages and excelled in all the various forms of Buddhist philosophy and meditation. In particular, from the age of sixteen he received various profound transmissions such as the Namchoe Tsalung, Dzogchen Sangye Lagchang, Thugchen Martri, Chagchen Zabtri and so forth, from the great Kyabgon Choekyi Dawa.

After fleeing from Tibet upon the invasion, he undertook numerous responsibilities of reviving the Tibetan Buddhist teachings, building many temples and creating leadership positions within the newly established Tibetan settlements. Beyond the many activities, Rinpoche in particular came together with Kyabje Khochhen Rinpoche to work in establishing the Mindrolling Monastery in Dhondup Ling Tibetan colony in Dehra Dun.